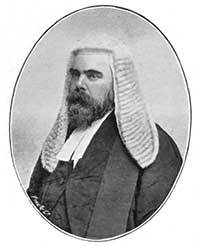 His Honour Judge William Masterman JP MA DCL was born 28 April 1846 and educated at Winchester and Wadham, taking a BA in 1868. He would go on to receive both a BCL and DCL before being aalled to the Bar at the Middle Temple in 1870. He became a County Court judge in 1891 in Nottinghamshire and the West Riding.

He was Master of Skinners’ Company (1889-90) and a Governor of Tonbridge School and other schools administered by the Company.

He was a Deputy Provincial Grand Master and a Grand Superintendent and Grand Mark Master in Nottinghamshire and made Past Grand Deacon by Grand Lodge. He was a member of Jerusalem Lodge No 197 and served as a Grand Steward in 1892-93.

He was originally approached to become the Founding Master of the Lodge, but declined that honour but subscribed to the petition nonetheless.

He was called to the Grand Lodge above in 1903.

He was the brother of his fellow Founder Charles Edward Masterman.