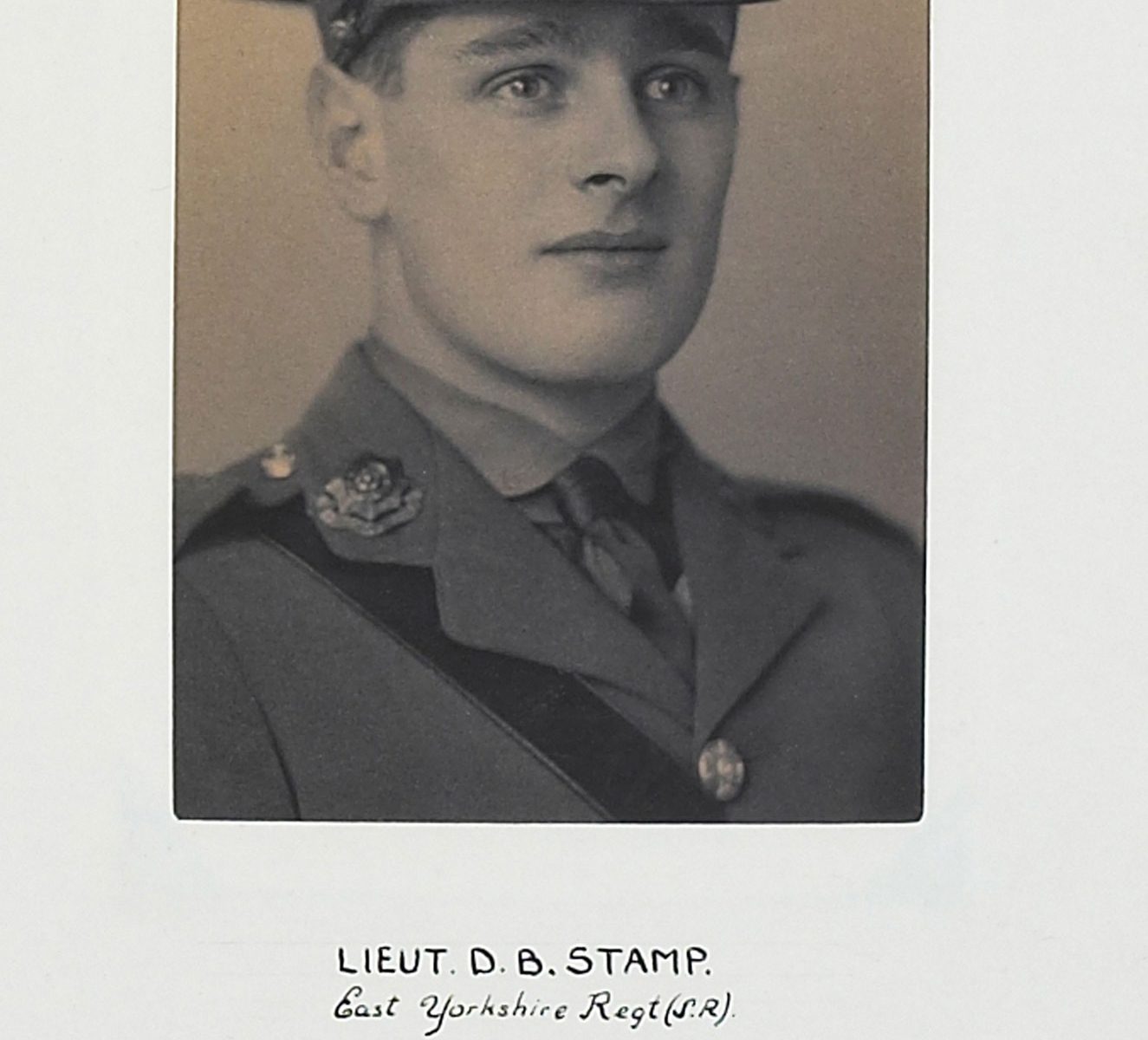 Stamp went to Tonbridge, was a Skinner and an initiate of the Pellipar Lodge No 2693. Serving in the 3rd Battalion East Yorkshire Regiment (SR), attached 1st Bttn. He was Killed in Action near Elverdinghe on 10 April 1916 and was buried at the CWG Ferme-Olivier Cemetery, Belgium.

Douglas B Stamp was the only son of Mr and Mrs Ernest B Stamp of Norvalia, Sevenoaks, born at Uddingston, Lanarkshire, October 14th, 1890. He went to Tonbridge in 1905 after Mr. W. H. Counsell’s, St. Aldate’s, Sevenoaks. At Tonbridge he was in Ferox Hall.

On leaving School he elected to gain foreign experience and spent three years in France, Germany and Russia. In this time he learnt to speak French and German fluently and Russian fairly well. In 1912 he joined his father in the family business, Stamp (Blatspiel) & Heacock in the fur trade in London and Glasgow, residing mostly in Glasgow.

Being born free of the City of London and the Skinners’ Company he was admitted to the Livery of the Worshipful Company of Skinners on 2 April 1912 and later initiated into the Pellipar Lodge No 2693.

He rode to hounds with both the West Kent and the Lanarkshire and Renfrewshire Foxhounds. He had been in the Cadet Corps and in 1913 he joined the Inns of Court OTC Squadron and was training on Salisbury Plain when war was declared, at once volunteering for foreign service.

He was commissioned 15 August 1914 into the 5th (Princess Charlotte of Wales’s) Dragoon Guards (SR) and attached to the 1st Reserve Regiment of Cavalry for training at Aldershot, but transferred to the Infantry and was gazetted to the Special Reserve Battalion of the East Yorkshire Regt in October 1914.

He joined his Battalion at Hedon, was promoted Lieutenant 2 February 1915 and in March went out to join the 1st Battalion in France.

He was wounded in the left hip during the attack on Hooge on 9 August 1915 and that same day was buried in debris caused by a bursting shell, only being dug out with difficulty and at great risk. His Colonel wrote that his conduct :

“was particularly gallant, and, though wounded quite early in the morning, he continued doing his work and looking after his men till 3 p.m. before going to the dressing station… I sincerely hope that he will make a good and speedy recovery, as he is such a capital officer and a great loss to the Battalion.”

He returned to light duty at Hull in November, became engaged in March, 1915, to Madeline, and was to have been married in May when he hoped to come home on short leave. He was invited and urged to negotiate a transfer to the East Riding Yeomanry, but he returned to the 1st Bttn in France in January. He was shortly afterwards attached to the 10th Entrenching Bttn and given command of a company, but after only a week or so became Adjutant to the 1st Battalion instead.

On the morning of April 10th the camp was heavily shelled, and he had just been round with his Commanding Officer to see that the men were all as safe as possible and was standing with the Chaplain outside their huts when a large shell landed some sixty yards away and he was hit and died before he could be conveyed to the adjacent field ambulance.

Close examination revealed a very small wound, and showed that a tiny splinter must have pierced the heart. He was buried the same day in a cemetery by the road from Elverdinghe to Poperinghe.

“He will be missed more than any man in camp: in fact, he was regarded by everybody with a happy affection such as I have not seen in any of the many camps that I have known. . . . He was as brave and lovable a man as there was in the British Army. His friendship and interest and help in my work as Chaplain drew me very near to him.”

His Commanding Officer wrote of him:

“Personally I miss his help more than I can say. He had recently taken over the Adjutant’s work and was doing extraordinarily well, and I hoped to be able to keep him with me for the remainder of the war.”

Stamp’s officers sword was passed to his nephew who served in the Duke of Wellington’s Regiment and was recently sold (NB this link refers incorrectly to the owner as Stamp’s son).

He was initiated into Pellipar Lodge in April 1914 and passed in October of that year.

His cousin W B Stamp was initiated into the Lodge in April 1917. He was Master of the Company. Sadly he too died too soon, in March 1919 of illness contracted whilst serving as an Officer of the City of London Special Constabulary.